More than 2,900 Anganwadi Workers have been trained in Madhya Pradesh to provide women with critical nutrition and dietary diversity-related information using participatory learning and action tools. 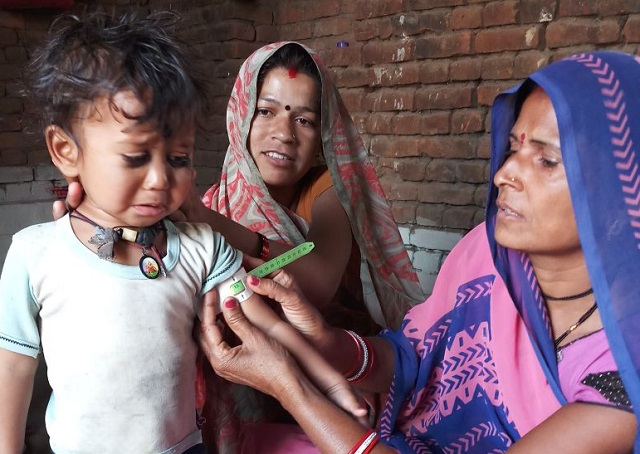 An Anganwadi Worker screens a child for malnutrition

“My daughter was born in the seventh month of pregnancy. She was weak and I thought it was due to her low birth weight,” recalled Meera of the village Pahra, Rajnagar block in the central Indian district of Chhatarpur. “I didn’t realise my child was also severely malnourished until I met our village’s Anganwadi Worker (AWW).”

The two-month-old girl was 1.7 kg when Chanda Sahu, the Anganwadi Worker (community health worker) measured her weight. Chanda suggested Meera to immediately take the child to the Nutrition Rehabilitation Centre (NRC), a government facility where severe acute malnourished children (SAM) are admitted with their mothers and get care. After 14 days of care, the baby bounced back and weighed 2.4 kg.

During one of her home visits thereafter, Chanda explained Meera how to take proper care of her child and also about the meetings she holds every month in the village to share information on food, nutrition and health.

Meera agreed to attend the meetings and was pleasantly surprised by the topics discussed there. “The gatherings were very helpful,” the 22-year-old mother said. “I realised how important it was to have a diverse diet on our plates every day or why it was vital to include vegetables in the meal,” she said. Her family’s daily meal plan has become more balanced today and her child is growing steadily.

The situation and the programme

Under the ‘One World – No Hunger’ initiative of the Germany’s Federal Ministry for Economic Cooperation and Development (BMZ), Welthungerhilfe, in collaboration with the Gesellschaft für Internationale Zusammenarbeit (GIZ),  the Women and Child Development  department under the state government and district level NGO partners (MGSA and Darshana) is implementing the Food and Nutrition Security programme in Madhya Pradesh.

The state is known for a high rate of malnutrition and infant mortality, primarily because of existing poverty, food insecurity, lack of food diversity as well as poor care and feeding practices. According to the National Family Health Survey (NFHS- 4), 42.8% of the children in Madhya Pradesh (39,12,900) are underweight and 42% children (38,39,762) have stunted growth. The infant mortality rate (IMR) in the state is one of the highest in the country and stands at 51 against the national IMR of 39 per 1,000 live births (NHFS-4).

The Food and Nutrition Security programme is being implemented in two districts which are having poor nutritional indicators and high malnutrition prevalence: Sheopur and Chhatarpur.

Sheopur is home to a large number of Sahariyas, a primitive and particularly vulnerable tribal community having a higher incidence of illiteracy, malnourishment and poverty. Chhatarpur has a large population of the OBCs (Other Backward Classes), the socially and educationally disadvantaged castes which fall between the traditional upper castes and the lowest castes.

One of the key tasks of the programme is the capacity building of Anganwadi Workers or the frontline workers, who help women and families take benefits of government’s nutrition and child health care services and adopt healthier behaviours.

AWWs are being trained to use participatory learning and action techniques

As part of the programme, the Anganwadi Workers have been trained to facilitate meetings in their respective villages with women on nutrition using a Participatory Learning and Action approach (PLA). “Our aim is to help them develop their communication and leadership skills and enhance their knowledge on key maternal and child health and nutrition-related issues including dietary diversity, food groups, preparation of nutritious meal and cultivation of nutritionally rich crops,” explained Pratibha Srivastava, programme coordinator, Welthungerhilfe.

Following the sessions, each trained AWW conducts similar participatory meetings at her village. Using tools such as flip charts, picture cards, stories and role plays, she orients women on identifying health and nutrition problems among themselves and their children and help them look for solutions to tackle them. “I start my meetings by explaining women about the importance of attending such meetings first. I tell them why it is crucial for them to know about nutrition and good health. Some are willing to attend the meetings and some are reluctant. But those reluctant often begin to enjoy our conversation in no time,” said Sarman Vishwakarma, an AWW from Ghoonchu village, block Rajnagar in Chhatarpur. 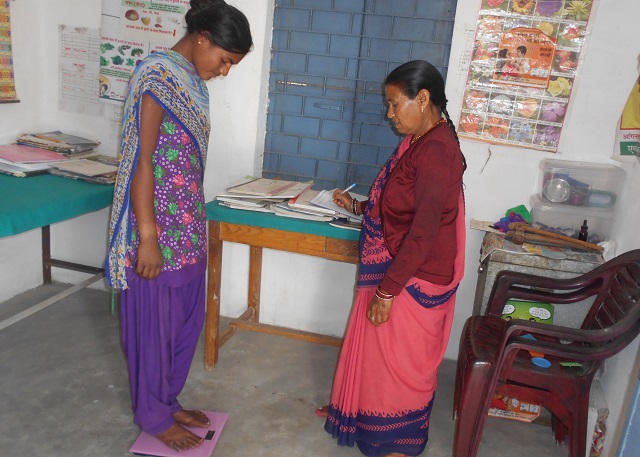 Despite the initial share of hiccups such as lack of motivation among women to join, these meetings have been able to draw women’s attention and become a well-attended gathering at the village level. The impact is visible, as Sapna, a mother of two from the village of Dahi (Bijawar block), Chhatarpur explained. “My husband is a smallholder farmer and I stitch clothes for a living. Cooking a wholesome meal for children was not always possible for me, considering the fact that the work at hand needed attention. Often I would give a readymade snack, or biscuits when my children cried for food. In the meetings I came to know that the food I gave to my children was not healthy and was a reason why they were not gaining weight,” she said. Instead of packaged snacks, she gives homemade food to her children now. 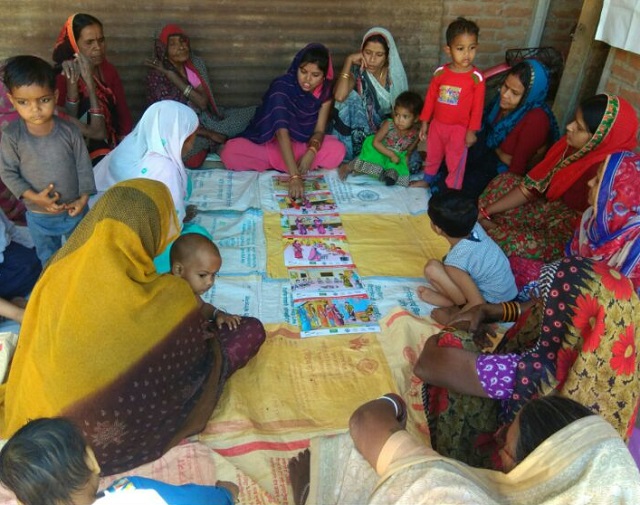 An AWW discusses food and nutrition with women

During the 20 cycles of the PLA meetings, the Anganwadi workers focus on explaining the pregnant and lactating women to take care of them and their newborns in the first 1000 days of life (i.e. from the start of pregnancy until the second birth of the child). “We talk about the importance of the timely initiation of breastfeeding within one hour of birth and exclusively during the first 6 months of life and the timely introduction of complementary foods and age-appropriate feeding in children,” said Chanda Sahu of Pahra village.

Through the sessions, the AWWs also discuss improving food and nutrient intake among adolescent girls and women to prevent anaemia.

Further, to ensure a supply of fresh vegetables, the trained AWWs and the project partners have provided support to the families to grow gardens in their courtyard or backyard or the space around their homestead. With the initial support from the project for seeds and manure, the families have taken up the initiative and have been successfully managing it.

Their nutrition garden has become a regular source of vegetables for the entire family. “We didn’t have money to buy vegetables earlier. Now we have a vegetable garden of our own,” said 24-year-old Chanda Ahirwar of Ghoonchu village. She plans to maintain it forever. “I have saved the seeds of the vegetables for the next planting season. Some I have shared with my neighbours as well. I am going to motivate others to take this up too,” she said.

Since the launch of the programme in Sheopur and Chhatarpur districts in 2015, 5,900 families have grown and maintained their own nutrition gardens.

More than 2,900 AWWs have received trainings and learned the participatory techniques to give quality nutrition education in more than 1,600 villages of these two districts.

Over 1,26,000 women (15-49 years) from over 1600 villages have participated in the meetings conducted by the AWWs. They have all become better aware of nutrition and food security and their rights to various food and nutrition-related schemes of the government.