In central India's district of Sheopur, villagers have been trained and supported to grow food for themselves through nutrition gardens. 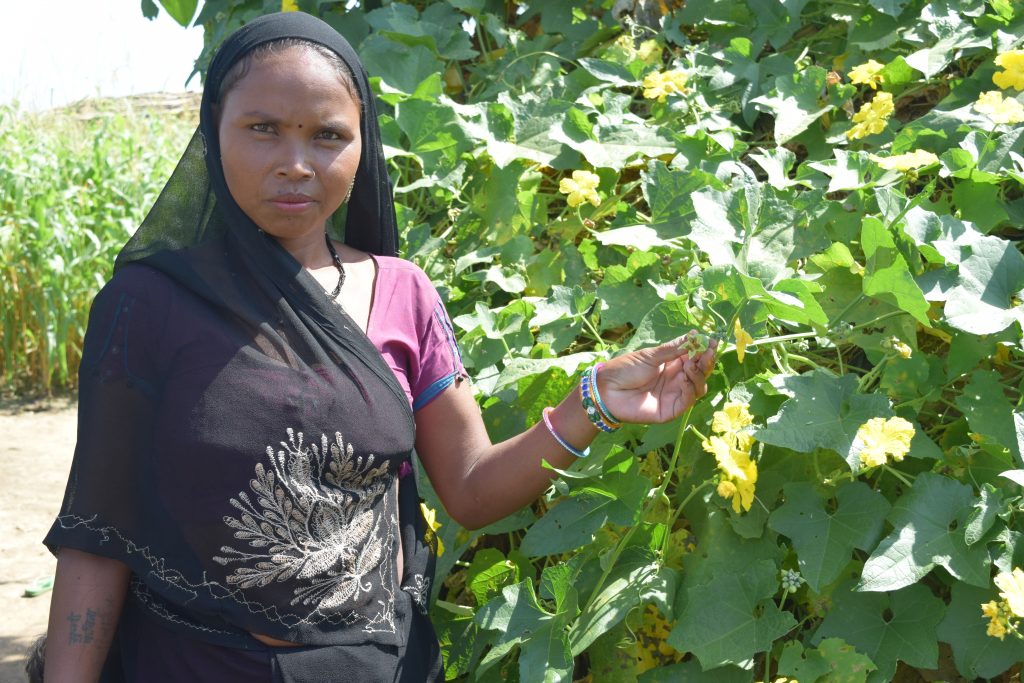 According to India’s National Family Health Survey (NFHS 4), 55% children in the district of Sheopur in the central Indian state of Madhya Pradesh are malnourished. In the district’s rural areas, largely dominated by Saharia, one of the most underdeveloped and vulnerable tribal communities, residents have been encouraged and supported to develop their own nutrition gardens. The results are astonishing.

“This is the first time I have done homestead gardening and I am so excited to see so many different kinds of vegetables grown in my backyard,” said Munni Devi of Sabdi village. Her house, covered with vines of pumpkins and squashes, says it all!

Earlier for Munni and her fellow residents, a diet usually consisted of chapatti (Indian bread) and handmade chutney. Vegetables and dals (Lentils) had been eaten rarely, only when it was affordable. “Now every day we eat vegetables and they taste really good,” says Mangi Devi, another villager. Like Munni, she has also grown vegetables such as pumpkins, bottle gourds, okra and aubergine. She is confident that her garden will contribute to improving the health of her entire family.

Welthungerhilfe has partnered with Mahatma Gandhi Sewa Ashram (MGSA) and Darshna Mahila Kalyan Samiti to improve food and nutrition security situation in Sheopur and Chhatarpur districts of Madhya Pradesh. The programme under the German Federal Ministry for Economic Cooperation and Development (BMZ)’s global initiative ‘ONE WORLD-NO HUNGER is supported by GIZ. Implemented in 100 villages of both the districts (50 villages of Chhatarpur and 50 villages of Sheopur), the project focuses on providing nutrition education and awareness in women particularly in the reproductive age group (15-49 years) through Participatory Learning and Action cycles (PLA) and on enhancing leadership skills of village level community health workers called ‘Anganwadi Workers’. 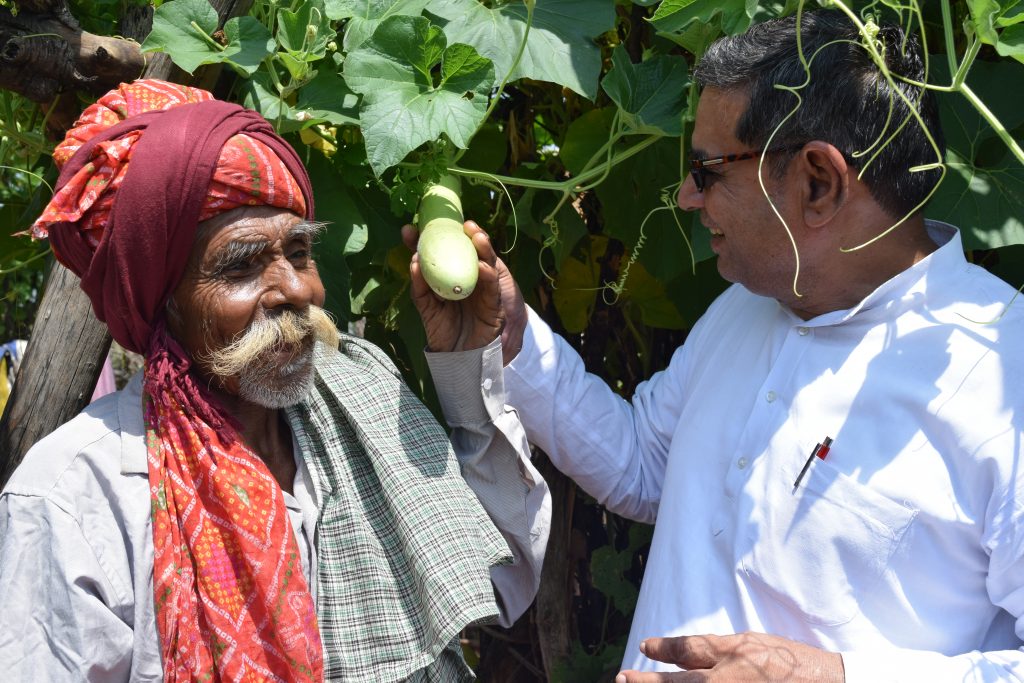 One of the major aims of the project is to improve diet and Dietary Diversity among communities particularly women and children. The objective is also to enhance access and availability of green leafy and highly nutritious vegetables for families, who have limited income-earning opportunities and poor access to nutritious food.
For this, villagers have been introduced to the idea of nutrition garden. The Participatory Learning and Action approach has been used to change behaviour related to health and nutrition and to increase awareness among families about food security and diet diversity.

“The programme is designed in a way that the supply and availability of nutritious vegetables is ensured throughout the year,” says Ransingh Parmar, Secretary MGSA. “We are providing seeds and saplings in three rounds. In the month of July, just ahead of monsoon, we gave families seeds and plants of seasonal vegetables and fruits. This was followed by a second supply in October. The third supply will take place in December.”
“Since it’s a one-time support, families have been given guidance on saving and storing seeds for the next planting season,” Ransingh Parmar added.

Besides, villagers are also given handholding for maintaining garden round the year. “I spend a couple of hours daily with women of my village. I often visit their homesteads and tell them how to look after their gardens and when to give water,” says Anita, a resident of Savdi village who works as a nutrition garden volunteer and advises families on maintaining the garden in an organic and efficient way.“I tell them how to keep the plants safe by using indigenous bio pesticides such as leaves of neem and wood ash and how to use household waste water to irrigate the plants.” 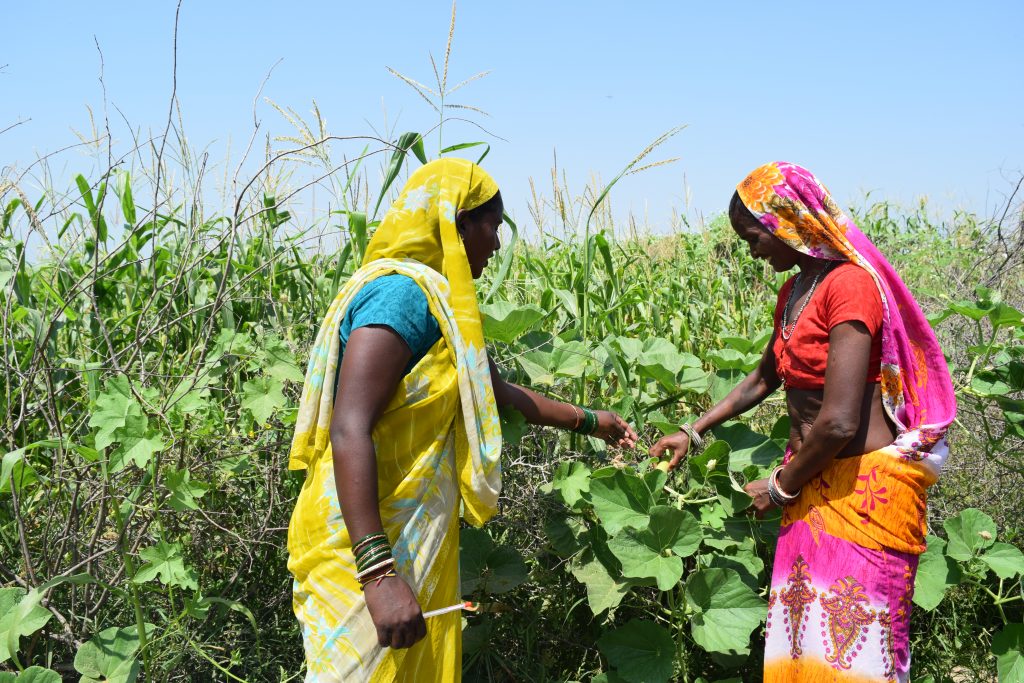 Each village has a volunteer, who has been trained by Welthungerhilfe’s partners to do the job. For Anita the orientation was an eye opener. “I didn’t know earlier that the vegetables we eat daily contained harmful chemicals and can cause ill health effects. Now I know this and I make sure that women in my village are aware of this too.”

Apart from this, 10 community based Nutrition counselors have been hired by Welthungerhilfe’s partners in each district, who oversee PLA activities in at least five villages each and mobilise communities. The project also support 12 Master Trainers in each district to facilitate the training initiatives.

The three year programme which runs until 2017 aims to help establish learning models for homestead nutrition gardens, and thereby help an estimated 4000 families establish home gardens and contribute in improving their food and nutrition security.

Marma turns to Integrated Farming for a better life

Food security in the time of crisis