The LANN – PLA process takes about a year and a half to implement through a series of 17 monthly meetings interspersed with multiple activities that help communities achieve food and nutrition security. 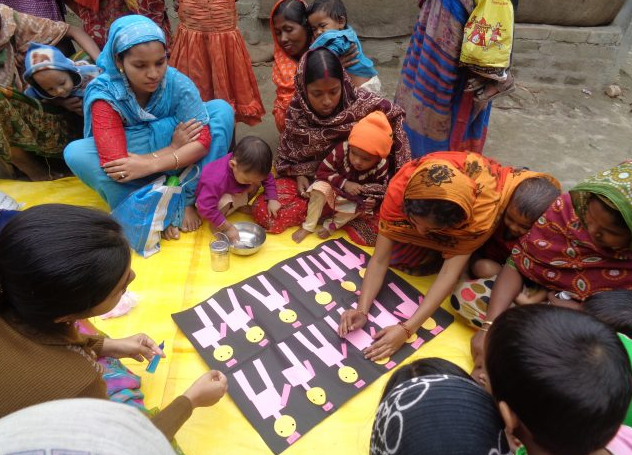 Linking Agriculture, Natural Resources and Nutrition is a nutrition-sensitive approach for management and planning of agriculture and natural resources by the community in a way that helps them achieve sustainable food and nutrition security. This ‘planning and management’ requires sensitization, knowledge and skills regarding nutrition, child care, agriculture, water and other resource management, WASH and entitlements. Under Welthungerhilfe’s Fight Hunger First Initiative, the sensitization and knowledge enhancement of the community on LANN is done using a participatory methodology called PLA – Participatory Learning for Action. The PLA is done through subsequent meetings in the community. Our PLA manual on LANN uses 17 meeting cycles in 4 phases:

The perceptible outcomes of the LANN PLA process are:

Under  Germany’s Federal Ministry for Economic Cooperation and Development (BMZ) funded ‘Fight Hunger First Initiative’, 3074 meetings have been conducted in 208 villages. This has directly benefitted over 41000 people. Significant results have been observed as a result of LANN PLA, for example, it is been seen that instead of cash crops, communities now increasingly grow food for themselves and sell the surplus only. After participating in the meetings, 75% of the families have made the challenging transition to ecological farming which in turn has cut costs for them. There has been an increased utilization of fallow lands and uplands and farmers have been shifting from mono-cropping to mixed cropping. This has increased both quantity and the diversity of the yield.

The link between hygiene and nutrition has been established. 80% of the community members who underwent LANN training wash their hands with soap today before eating food and after defecation. Infant care and feeding practices have also improved significantly. The communities have realised the intergenerational effect of malnutrition. 90% are aware of the effect of early marriage on the maternal and child health and nutrition and 75% have taken concerted action against the marriage of adolescent girls.

“In the LANN meetings, I learnt about malnutrition and how it can be measured using height, weight and mid-upper arm circumference of a child. Earlier I used to go to the Anganwadi Centre only to bring the food but now I regularly check with the Anganwadi Didi whether my child is in the green, yellow or red zone,” said Neelam Devi, Barjora village, Deoghar district, Jharkhand. 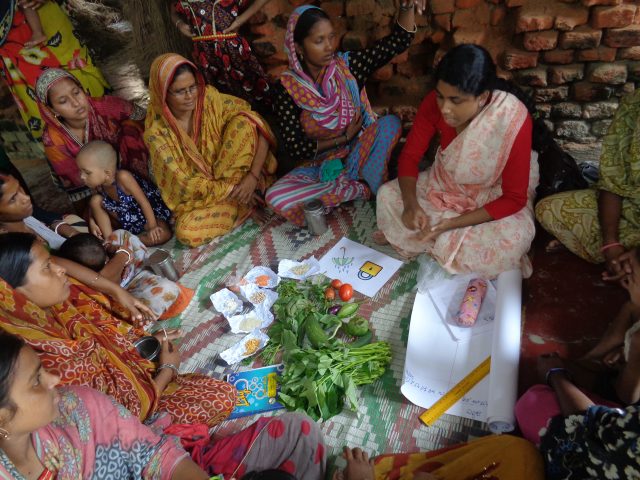 Women taking part in a meeting on dietary diversity

The quality of micronutrient intake is measured by conducting the dietary diversity scoring. To simplify the concept of food diversity the Indian tricolour flag has been used. The community found it easy to remember and called it the “Tiranga Bhojan” in Jharkhand. “We used to think that healthy food is expensive but after attending the LANN meetings we realised that the food needs to have three colours for it to be complete and healthy,” said Bissam Cuttack of Lanji village, Odisha. “Most of us used to drink thin gruel made of Mandya (finger millet) and Joanna (sorghum) in the morning and set out to the field and drink the same in the afternoon too. Now we make the gruel thicker and nutritious by adding dals (pulses) and ponniporiba (vegetables) to it. It fills the stomach better too,” he added.

Also, the concept of kitchen garden has been introduced to the communities in the intervention areas. As a result, over 85% families now have their own kitchen gardens where they are growing an array of local and seasonal vegetables. The lost tradition of eating uncultivated food collected from pond, canal and forests which are rich in nutritive value has also been revived. Kanna Manna sag and Maya sag (leafy vegetables), Kanua (fruit), Arua (tuber), Harra (medicinal fruit), Chauthi (mushroom), red ants and insects are all now back in the daily menu of families leading to an addition of 20 – 30 indigenous foods varieties among the Kond tribes in Rayagada. In Odisha, 12 varieties have been incorporated that can be consumed in the dry form. In Rajasthan, 500 families have developed Wadis (Orchards) of 40 types of fruit plants for consumption as well as income generation. All this has ensured dietary diversification and families are being able to consume at least 5 out of the 10 food groups daily.

Looking inward during a pandemic