Welthungerhilfe has been working in the drought-prone Bundelkhand region in collaboration with the European Union and a grassroots’ organisation Parmarth Samaj Sevi Sansthan. In our intervention villages, with the support from partner Parmarth, a cadre of women called Jal Sahelis has been developed, who take initiatives in managing and conserving water resources and fight for their water rights. 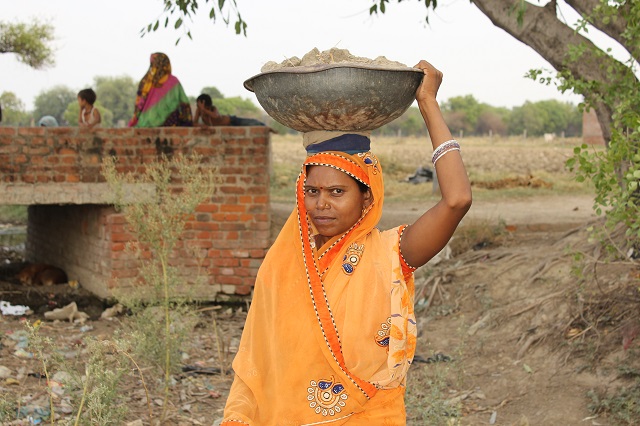 They are determined, relentless, motivated and often unstoppable. They fight for their rights, their village’s development and for the basic necessity of life: WATER. They are Water Warriors.

Though their villages are different, their motto is one: Access to water for all.

To achieve this aim, they struggle hard. They dig wells in their village, desilt ponds, build check dams along with the community, install and repair hand pumps and do rainwater harvesting.

“It’s a matter of survival,” says Kunti Devi of Mamna village. “There is a serious water crisis in our village. The drinking water is saline. There are 45 hand pumps in our village alone that yield salty water which is unfit for consumption. Ideally, we should get regular water through the government’s water supply scheme. But that water is available only twice a week because of a shortage of electricity. Women have to walks miles to get water from the tube well. This has adverse effects on their health. Our mothers, grandmothers and great-grandmothers had to work hard to fetch water. So did we.  But that’s enough now.  We don’t want our daughters to go through this. We want them to study.” 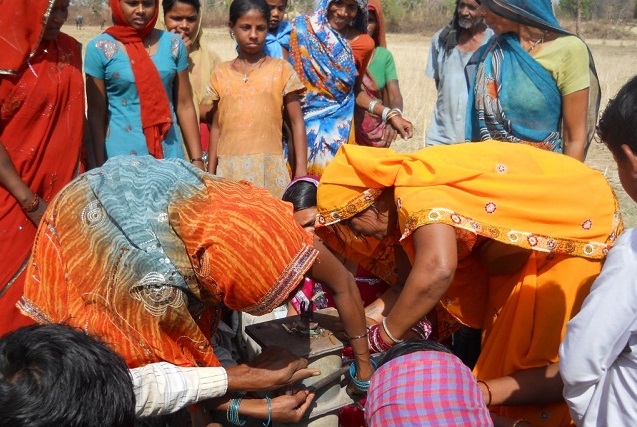 Sima Devi of Dhamna village resonates with the view. To move forward, she thinks, women ought to take initiatives together. “I realized if we have problems we need to look for solutions ourselves. We cannot always expect others to do it for us,” she says.

As expected though, making a start was not easy for them. They had to overcome barriers at every level: family, caste or community.

As Sima shares, “Initially when I began working as a jal saheli, many people in the village told my husband that I should be ashamed of participating in meetings with men. At times, they said that I was ruining the culture by stepping out. I discussed the work with my husband and took him to some of our meetings. When he saw with his own eyes that the work we were doing was for the development of the village, he started supporting me. Gradually the community changed its attitude towards me and my work as well.”

Calling it a step in the right direction, Puniya Devi says ‘becoming a Jal Saheli has been an empowering process for me’. “I feel confident. I can now meet government officials without hesitation and raise and share our concerns.”

Something new and unusual for women, who have always lived behind the veil and were not allowed to talk to anyone outside the family, let alone a man. 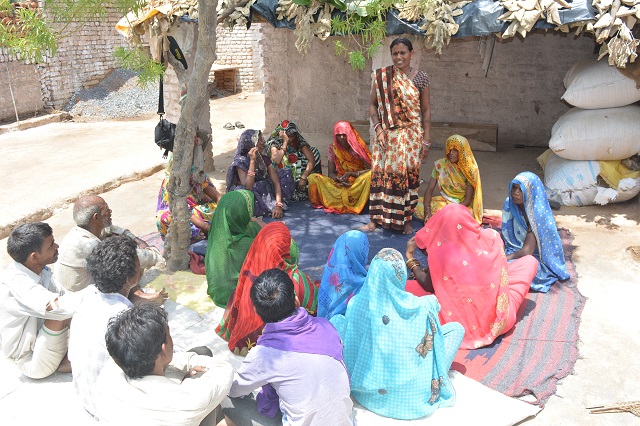 The concept of Jal Sahelis was first introduced during the implementation of the European Union and Welthungerhilfe supported Integrated Water Resource Management project in 2011 by Parmarth Samaj Sevi Sansthan, a grassroots’ organization in the region.

As it evolved over the years, the initiative got a further boost under the European Union-funded ‘Building grassroots civil society cadres for effectiveness and transparency project’, which is being implemented by Welthungerhilfe in six states, including Uttar Pradesh.

As part of the initiative, Jal Sahelis have constituted informal committees in their villages called Pani Panchayats or water councils, which is a platform to link women on water issues. The objective is to increase women’s participation in decision-making, in particular, on water and livelihood related issues in the region.

Whether water management, conservation, the revival of old water structures, creating more water resources or issues such as sanitation, hygiene, employment and overall development of the village, Pani Panchayat serves as a  forum to discuss village issues.

“It’s a place where we share problems and deliberate on strategies to resolve them collectively,” says Puniya Devi. 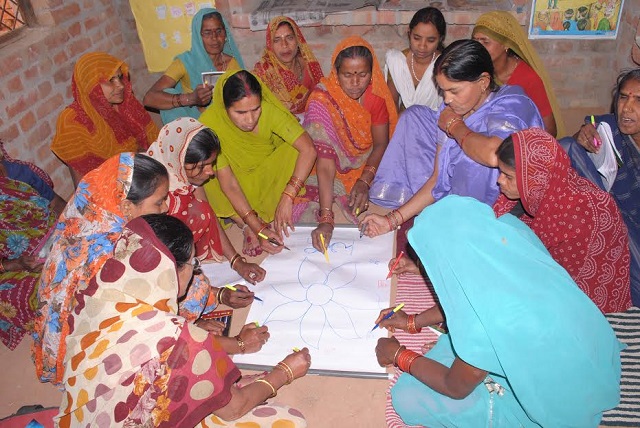 Today, 260 Jal Sahelis are working in 130 Welthungerhilfe and the European Union supported drought-prone villages of Bundelkhand region. Most of them are from Dalit (formerly known as untouchables) and tribal communities, which have been oppressed and discriminated against by the upper caste.

Their prime job is to take part in the governance process by participating in village level meetings on water, livelihood and development issues. They help set priorities for the village and play a decisive role in the management of water resources, including issues such as equal distribution of water, assessing the need for creation of new water bodies and revival of those which are defunct, with the help of the government rural employment scheme (MGNREGA).

To fulfil this task effectively they get support from Parmarth, which builds their capacities by providing trainings on topics ranging from larger themes such as water rights and water literacy, to explaining them norms and guidelines of government’s ongoing employment schemes and Panchayati Raj Institutions (PRIs) to more skill oriented sessions on conducting social audit, preparing water securing plan, using IT techniques, managing water resources, monitoring and checking water quality  as well as repairing hand pumps. 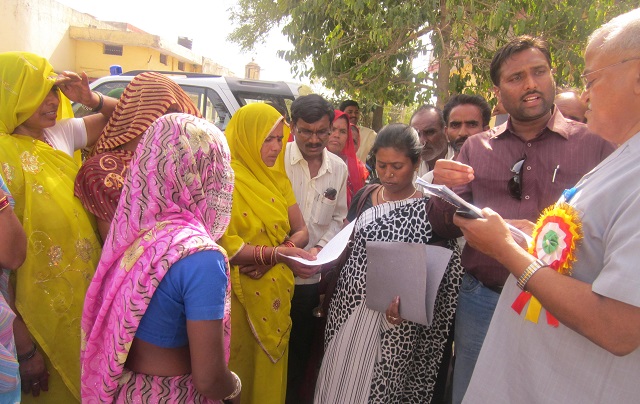 The results are evident. Through the Jal Sahelis’ direct efforts, 56 new water bodies have been created and revived including check dams and ponds that have helped increase ground water level. 112 water bodies have been constructed through convergence between various stakeholders. A special fund for maintenance and management of water bodies has been created at village levels. The Jal Sahelis have been effective messengers of water literacy by significantly contributing to raising awareness on using water efficiently, undertaking rainwater harvesting and sustainable agriculture practices and kitchen gardening. They also undertake legal action at panchayat, block, district and state level against those who violate rights such the right to life, the right to dignity, the right to work and the right to equality among others.

No wonder their efforts have generated widespread media attention. They have also been lauded for their efforts at district, state as well as national levels. 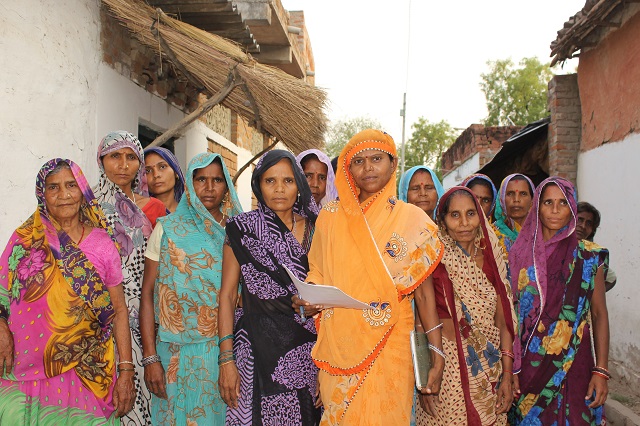 But their mission is not over. They are dreaming big. Being a strong advocate for water rights, they are working with national level activists to get a Water Security Act and river rejuvenation policy enacted in the country. The move, they hope, will ensure equal access to water for all the communities.

“I want to see our villages prosper. I want to see drinking water available in every household. That’s what I am working for. And this is just the beginning,” says Sima Devi assertively. An optimistic smile lights up her face.

Local farmers market, handwashing facilities and many more to address COVID-19 in Jharkhand

Addressing the deadly second wave of COVID-19 in Bundelkhand