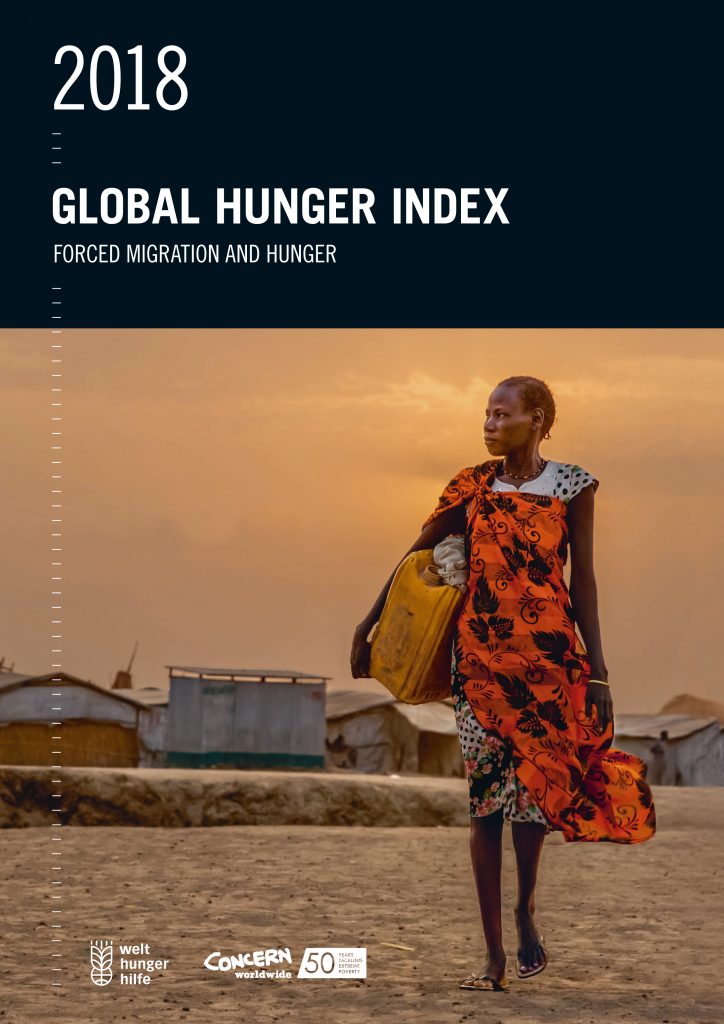 The 2018 Global Hunger Index was successfully launched in India and Bangladesh in the month of October. The report is jointly published by Welthungerhilfe and Concern Worldwide.

The 2018 Global Hunger Index reveals that worldwide the level of hunger and undernutrition based on GHI scores went down from 29.2 in 2000 to 20.9, representing a decline of 28 percent in that period. Underlying this improvement indicates reductions in each of the four GHI indicators: the prevalence of undernourishment, child stunting, child wasting, and the mortality rate of children under age 5.

According to the 2018 Global Hunger Index (GHI), Bangladesh falls into the serious category. At 26.1, Bangladesh’s 2018 GHI scores is an improvement of 28% from 2000 when its GHI score of 36.0, considered alarming.  Bangladesh is ranked 86th out of 119 countries. As per the current report, undernourishment for the country’s population is 15.2 percent and stunting of children under the age of five stands at 36.1 percent. 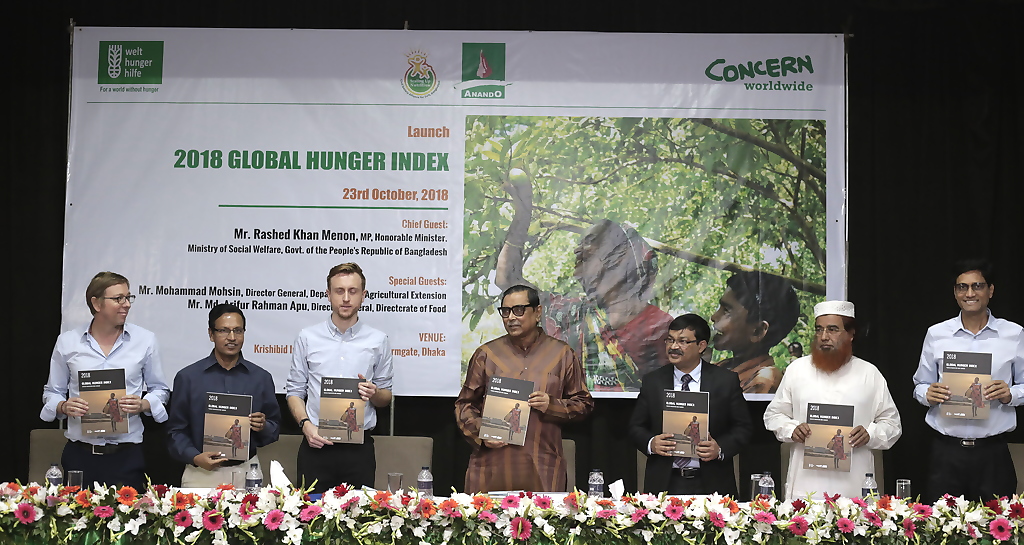 During the event, discussions were held around the GHI indicators and its relation to the Sustainable Development Goals. With Bangladesh now becoming ‘food surplus’ and exporting food, the delegates discussed its impact on food and nutrition situation. Issues related to the current challenges of smallholder farmer’s access to markets, social inequality and effect of hunger on minority groups and impact of the Rohingya situations on FNS situation in Bangladesh were also highlighted.

Mir Nural Alum – Director Planning, Project Implementation and ICT, Department of Agricultural Extension summarized the GHI results, highlighted the increase in food production of Bangladesh. He also emphasized the need to focus on distribution and access as key challenges, importance of diversification of agricultural sector to improve nutrition and quality of diets and the role of agricultural extension services to support farmers.

Arifur Rahman Apu – Director general, Directorate of Food spoke extensively about the social welfare programmes to ensure everyone has access to sufficient food in the country. He highlighted that the ain cause for the current undernutrition/malnutrition in the country are changed food habits and culture which need to be addressed. He also emphasized that the government should target the poor and vulnerable sections of the society in creating awareness, and the crucial role of private sector to promote better nutrition.

Some of the key recommendations made during the event focused on the need to prioritize nutrition in national policies, greater focus on women’s empowerment including better access to land, education, health services and delay or early marriage; build resilience and preparedness for adverse impacts of climate change and need to strengthen agricultural sector in this regard; and continue to effectively world in WASH sector particularly around sanitation and awareness raising.

Following the event, a decision was taken to organize the GHI launch every year on 16 October on World Food Day.  The aim is to have a larger network conference on food and nutrition security.

In India, the 2018 GHI report was launched by Sri Saryu Rai, Honorable Minister – Food, Consumer Affairs and Civil Supplies, Government of Jharkhand on 11th October 2018 in Ranchi, Jharkhand. The event was jointly organized by Welthungerhilfe and its partner organization LEADS. 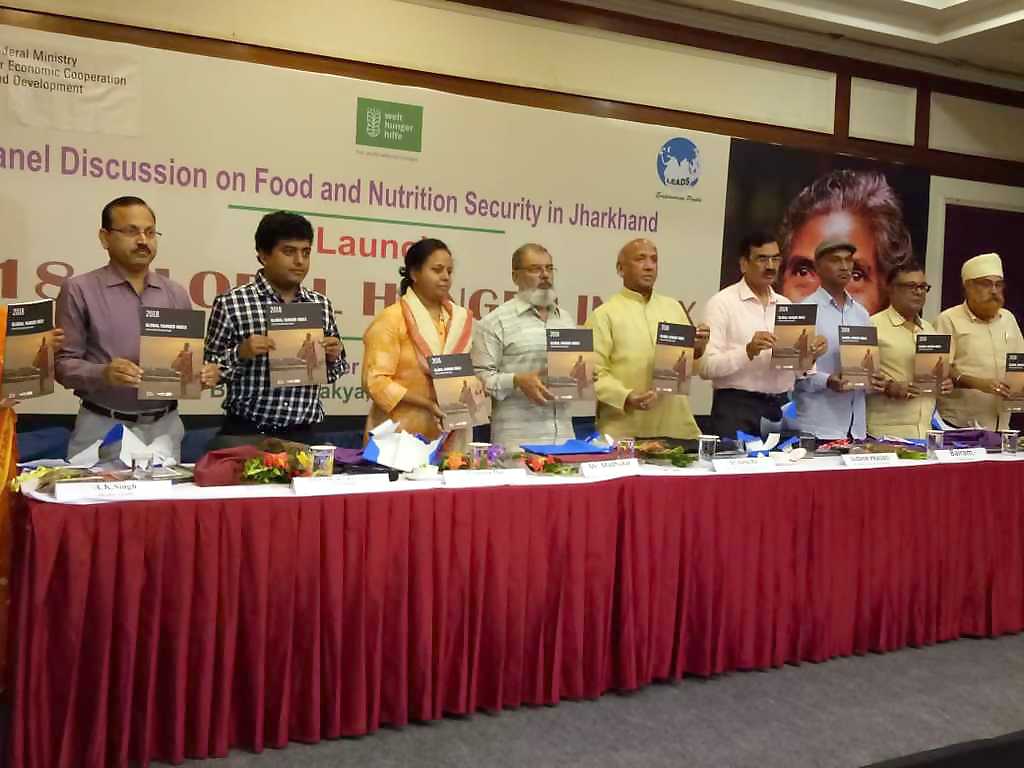 Release of the 2018 Global Hunger Index Report in Ranchi, Jharkhand.

India, with a global hunger index score of 31.1, currently falls under the ‘serious’ category standing behind other South Asian countries like Sri Lanka, Nepal and Bangladesh. With the region’s largest population, India also has the highest level of child wasting, at 21 percent according to the latest data. Proportion of undernourished in the population stands at 14.8 percent. By contrast, the country has made considerable progress in reducing its child stunting rate, which stands at 38.4 percent, down from over 60 percent as of 1990. The GHI 2018 report also shows that the mortality rate of children under five years of age in India stands at 4.3 percent. India is currently, ranked at 103rd out of the 119 countries covered under the GHI 2018.

The launch was also followed by the release of the state level hunger data of Jharkhand based on a rapid assessment survey done by a group of civil societies. This survey showed that 50.3 percent of the people in Jharkhand do not have enough food availability for their needs. The study also indicated the level of food insecurity during hunger periods for Other Backward Classes (62%), Primitive Tribes (53%), Scheduled Tribes (38%) and General category (26%). Overall, only around 59.3 percent of the households have access to three-meals a day and only 26 percent of the households can consume two-meals a day.

Now in its 13th year, the Global Hunger Index report ranks countries based on four key indicators: undernourishment, child mortality, child wasting and child stunting. The 2018 report ranked 119 countries in the developing world, 52 of which have ‘extremely alarming’ and ‘alarming’ or ‘serious’ hunger levels.