Welthungerhilfe celebrated its 55 years on the 14th of December 2017. The anniversary was commemorated at various country offices of the organisation across the globe. 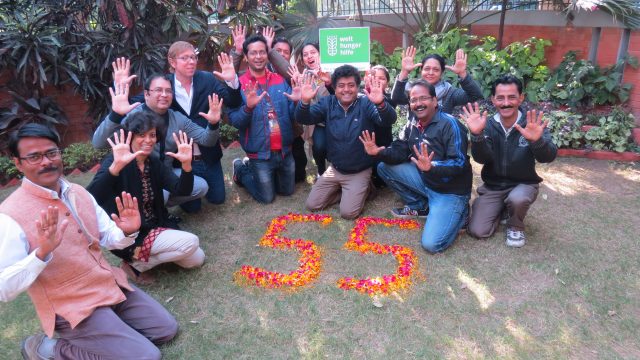 Welthungerhilfe’s staff marked the day in their own way. The India team celebrated it with a floral rangoli and by sharing pictures on social media platforms.

The 55th anniversary also offered an opportunity to various teams across the globe to celebrate the achievements thus far and to reaffirm their commitment to working for a world without hunger.

Welthungerhilfe is one of the largest private aid organisations in Germany, politically independent and non-denominational. It is fighting for “A world without hunger by 2030”.

Established in 1962, as the German section of the “Freedom from Hunger Campaign”, one of the world’s first initiatives aimed at the eradication of hunger, Welthungerhilfe has supported more than 8,500 overseas projects in 70 countries. Around 1500 rural development projects have been implemented in South Asia through local partner organisations.