The Global Hunger Index 2017 has been released. India’s hunger level is ranked as “serious” and the country is positioned at 100th position out of 119 countries.

From being ranked 97th in 2016, India has slipped to the 100th position in this year’s Global Hunger Index, same as Djibouti and Rwanda. More than a fifth (21 percent) of children in India suffer from wasting (low weight for their height), reflecting acute undernutrition, according to the 2017 report released today. The report shows the country has made progress in some areas: Its child stunting rate (low height for their age), while still relatively high at 38.4 percent, has decreased in each of the reference periods in this report, down from 61.9 percent in 1992. Also, the percentage of Indian population undernourished has decreased from 15.2% (GHI 2016) to 14.5 %. But with a score of 31.4, India’s hunger levels continue to remain “serious”.

The Global Hunger Index, jointly published by the International Food Policy Research Institute (IFPRI), Concern Worldwide, and Welthungerhilfe, tracks the state of hunger worldwide. The GHI, now in its 12th year, ranks countries based on four key indicators: undernourishment, child mortality, child wasting and child stunting. The 2017 report ranked 119 countries in the developing world, nearly half of which have “extremely alarming”, “alarming” or “serious” hunger levels. 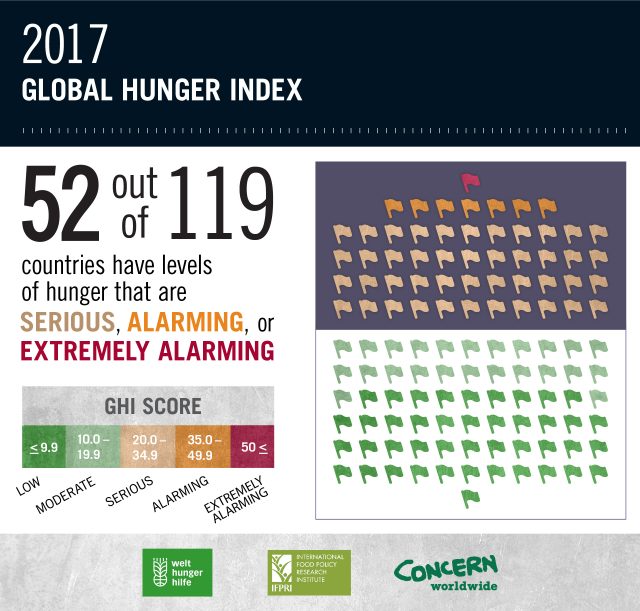 Globally, the hunger levels have fallen more than a quarter since 2000, but rising hunger scores of several countries in the 2017 Global Hunger Index underline how uneven this progress has been and how precarious it is to maintain. Famine has cast a shadow over four countries in the past year while conflict and climate change continue to hit the poorest the hardest. The Global Hunger Index this year indicates that beyond these acute crises, long-term obstacles to reducing hunger in several countries may also be threatening efforts to reach zero hunger.

The report highlights that extreme inequalities within and between countries are perpetuating hunger. The uneven distribution of hunger and malnutrition reflects the unequal distribution of power in the global food system. And women, ethnic minorities, indigenous peoples, rural dwellers and the poor—groups with least social, economic, or political power suffer most from hunger and malnutrition. Of the 119 countries assessed in this year’s report, one falls in the extremely alarming range on the GHI Severity Scale; 7 fall in the alarming range; 44 in the serious range; and 24 in the moderate range. Only 43 countries have scores in the low range. 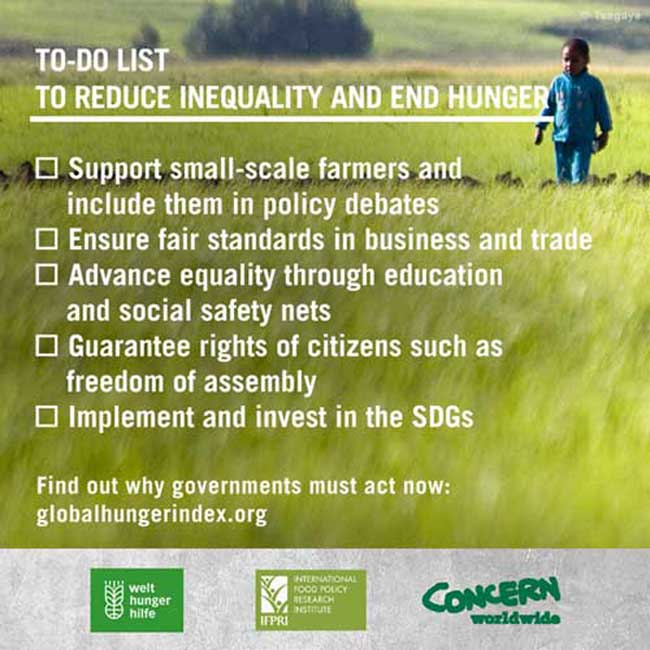