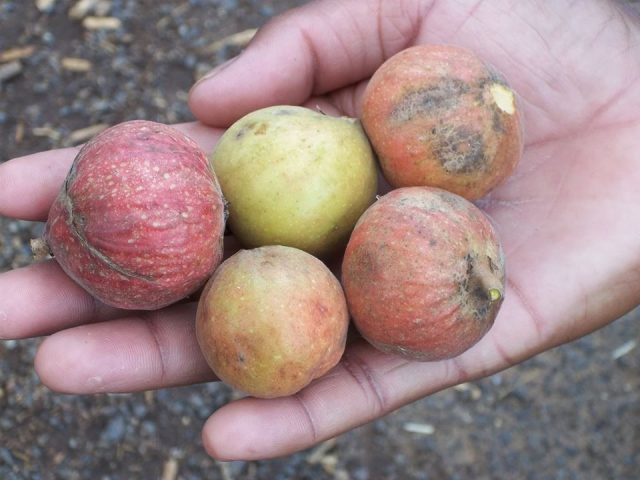 It was a January morning. The misty hills were emerging out in the horizon with the changing mood of the sun. I crossed a Santhal village in the foothills and started moving up to reach a Paharia village, Kutlo Pahar,  on the top of a hill in Litipra block of Pakur district in Jharkhand. The dominant tribal community here is the Paharias. The paharias, as the name indicates, are a hill tribe settled in the hilly ranges of the Rajmahal hills. Paharias survive on shifting cultivation and a traditional forest based economy.

After walking one hour I reached the village. The villagers informed me about the practices prevalent there. Paharias cultivate cowpea by cleaning up and often burning bushes on the hill. They also do mixed cropping with pigeon pea and maize. Paharias depend on Mahajans, the local money lenders, for seeds and also market. The Mahajans also sell or barter essential goods such as rice, potato, onion, chilly etc., However, Mahajans are not considered as a threat, as perhaps they are the only link to the outside world.

People also shared as to how they lost the forest and forest based food and traditions– mostly because of the increasing pressure on the forest due to population. The community identified 10 types of mushroom, 8 types of aquatic weed, 5 types of honey, 24 green leafy vegetables, 15 types of fruits, 6 types of vegetables, 6 types of legumes, 2 types of millets, 4 types of tubers and 3 types of seeds which are available in the wild.

The gap in the diet

A nutrition survey was conducted as a part of the baseline study of ‘Fight Hunger First Initiative’ of Welthungerhilfe in 2012, in 10 villages of Paharia tribes. The study highlighted that 33% of the children are severely and another 40% are moderately underweight. 56% of children are stunted. The average calorie consumption drops to 1,500 kcal during periods of food shortage. On the contrary, a study with the Dongaria Kondh community in Niyamgiri hills showed that forests provide rich food sources throughout the year and contributed approximately 37%, 30% and 45% to the total food basket of tribal in summer, rainy and winter season, respectively.  This points to the fact that the share of forest foods in the diet of the tribals has been on the decline, for several reasons. For instance, in recent years, the government has introduced subsidized rice for the tribal and Below Poverty Line (BPL) families to cope with hunger. This has brought about a significant change in their food habits – reducing their diet diversity to very simplified rice based meals. With very little awareness on nutrition, the tribals now sell off the nutrient rich wild foods like fruits, roots and tubers, insects, birds, rodents, edible leaves, mushrooms, tamarind, and bamboo shoots to the middlemen in exchange for salt, oil and other domestic products at a throwaway price.

“The children are not hardy as we used to be in our days” – Rawte Paharia, one of the elderly members of the community, murmured. Taking this forward, looking into the seasonality of wild foods became our initial point of reference. We engaged children in identifying and documenting these foods. It was evident that with the modern development trends, their indigenous knowledge base had eroded. The younger generation unaware of their heritage and rich biodiversity, are depending more on external sources of food and medicines. Consequently, they are more vulnerable to malnutrition, hunger and disease.

Communities could recall uncultivated food, mostly the wild edible plants including leaves, flower, fruits, animals, birds, mushroom, fish, crabs, shrimps, honey etc. They shared, how these uncultivated food are natural insurance for them against climatic shocks, especially in the stress period, generally during summer and rainy season. A farmer, in his 40s, came forward – “In my childhood, we hardly bought anything from open market except kerosene and salt, now we have to buy most of the things from outside market or mahajans who more frequently trade with us. The cash income has become a big deal for survival. Forced migration and logging of our trees are a direct fall out of this changed scenario.”

Gradually with time, the community identified 10 types of mushrooms, 8 types of aquatic weeds, 5 types of honey, 20 types of birds, 24 green leafy vegetables, 15 types of fruits, 6 types of vegetables, 6 types of legumes, 2 types of millets, 3 types of flowers, 4 tubers and 3 types of seeds which are available in the wild. All these have been documented carefully with their local names, scientific names, description, propagation habits, choices and tolerance, use, nutritional value, seasonality etc., by the volunteers from the community. Scientific identification of mushroom and fishes could not be done, inspite of expert’s involvement.

The documentation process enriched us in understanding nature, environment, food and related culture of the Paharia tribe, but for the community, it resulted in improved diet diversity. In the beginning, it was more at a knowledge level. During the rainy season, a couple of tubers and leafy vegetables and during summer, some fruits were included in the diet. This has turned to twelve to fourteen servings per week in their lunch and dinner. Women could recall some of the recipes and practices that were almost forgotten. Preservation activities like dehydration of green leaves, pulse cake made of local dried leaves and wet ground pulses etc., have also been tried, appreciated and included back in the diet.

On the basis of these experiences, a capacity building module was developed focusing on nutrition education. This included basic nutritional health and sanitation related issues, preparation of local recipes, simple techniques of food processing etc. Also, a women’s group with 25 mothers selected from 10 villages, was trained to take this agenda further.

The process also went beyond food and diet. Community leaders started to conserve uncultivated food and surrounding natural resources.  Several challenges were faced during the conservation process. The survival of new plant samplings was a serious challenge. It was observed in the forest that the local species had a very good symbiosis which ensured their survival and growth, whereas, the plantation in the degraded forest often failed. Using this lesson, communities focused on developing in-situ conservation methods by supplementing gaps in dense forest locations. Four ex-situ conservation sites were developed, one each at Buchotola and Simlong village, whereas 2 sites were developed on Kutlo pahar village. At each location, 35 to 40 local species have been initially conserved. This spontaneous work was further synthesised into another capacity building module for community leaders on conservation related issues of uncultivated food and commons.

To bridge the nutrient gap in the diets, some allied activities were taken up. Most of the legumes after harvest were stored by local communities in plastic bags which often resulted in pest attacks, forcing farmers to sell legumes within one or two months of harvest. To address this issue, GI sheet drums were introduced across 70 households to store the legumes. Members were trained in preservation processes using local materials like dried neem, pongamia and vitex leaves. This has checked distress sale of legumes.

Along with ex-situ preservation, many other initiatives were taken up. For example, plantation of local varieties of jujubay, custard apple, mango, guava, jackfruit etc. were taken up in the homestead,  cultivation of bajra was revived in 6 villages,  catchment treatment and channel creation for water was done extending the water availability for additional two months period. 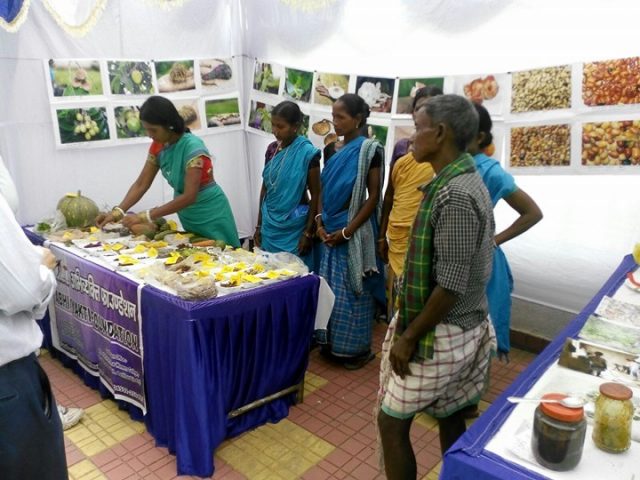 Some of the farmers visited Ranchi and Delhi to share their knowledge – some were first timers – stepping on a motored vehicle! The treasure to them was these foods, but the treasure to us remained the joy and confidence in the eyes of some farmers like Rawte Paharia, Shankari Paharia and many more. They are now involved in creating Food Forest for in-situ conservation of these wild food sources inside the forest by planting a judicious combination of various trees, shrubs, creepers/ climbers, grasses, tubers – that acts as a food reserve and provide fuel and fodder as well. A long way to go, indeed!

*The article was originally published on leisaindia.org and can be accessed at http://leisaindia.org/articles/uncultivated-foods-the-hidden-treasure/

Food security in the time of crisis