“We walked for days without food”: A Rohingya paddy farmer

“We walked for days without food”: A Rohingya paddy farmer 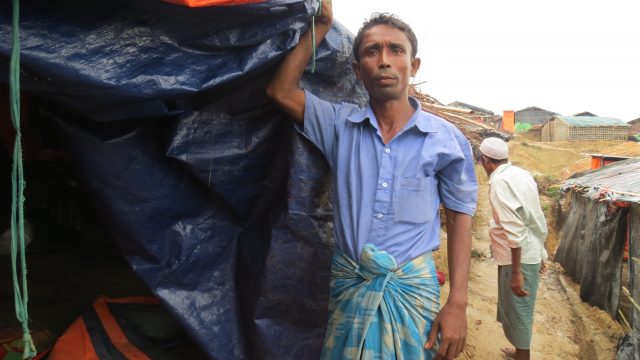 “I left my country because I had no choice. I had to save my family’s and my life,” said Sher Mohammad, who escaped violence in the Rakhine state of Myanmar to reach Cox’s Bazar’s Jamtoli refugee camp. The 32-year-old paddy farmer walked for eight days along with his wife, three young kids and old parents. All he could bring with him was just a kilogram of rice. “Life was fine. Suddenly the violence erupted and everything was finished. My house was burned down. Initially, we were hiding in the paddy fields. But the soldiers came there and opened fire at us, shouting ‘go away from here and never ever try to come back or else you will be killed’. We ran to save our lives. My cousin and my neighbour died in the shooting,” he recalled.

As soon as he managed to cross the river Naaf, which flows between Bangladesh and Myanmar, he took a sigh of relief. “I thanked God for saving us. It’s hard to explain what we went through. We walked for days without food and even more painful was to see my old parents and my children starving,” he said. 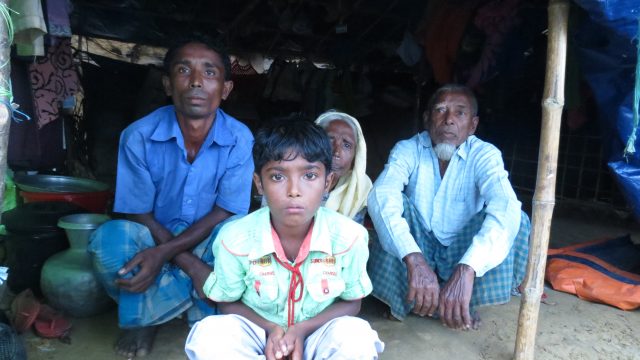 Sher Mohammad with his parents and a kid

In Bangladesh, the initial support for Sher Mohammad came from the local community. “A man gave us 120 Taka (1.2 Euro) and a local relief organisation gave us some puffed rice. We had it immediately. We were so hungry.”

Sher Mohammad’s family now lives in a makeshift tent made of bamboos and plastic sheets. They share the tent with another family. They are surviving on the basic ration (rice, lentils, salt and oil) that they have received from the aid agencies. They do long for vegetables and fish but have no money to buy it. “We cook some rice and lentils in the morning and have it. At times twice a day, depending on the ration available.” 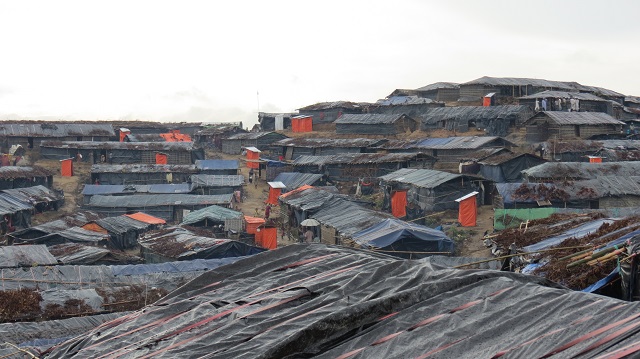 “I lived with my husband and our three kids in Dakhin Merulla, Maungdaw(Myanmar). He was a maulvi, a teacher of Islam. Life was fine and I had no complaints. But all of a sudden everything has changed,” said Hamida Begum while holding back tears.

Her husband died in the indiscriminate firing, which she claimed was opened by Myanmar’s soldiers. “They came and started firing on us. We began to run to save our lives. Suddenly a bullet hit my husband’s back. Within seconds he died in front of our eyes. I stood there with my kids. I did not know how to react. My sister came hurriedly to us and asked us to run,” Hamida recalled.

The family ran and hid in bushes like others. “The next morning as soon as the people hiding with me started walking, I began to follow them with my kids and my sister’s family,” she said.

For five days they walked. Hungry and tired they reached the river Naaf that flows between the two countries. “My brother-in-law gave money to the boatman to take all of us across the river. Somehow we reached Bangladesh.”

Upon reaching Hamida and her sister’s family began following the crowd again and landed up at a refugee camp in Balukhali.

Hamida begum now lives in the remote hillock of Balukhali camp in a tent made with the help of her sister and brother-in-law. 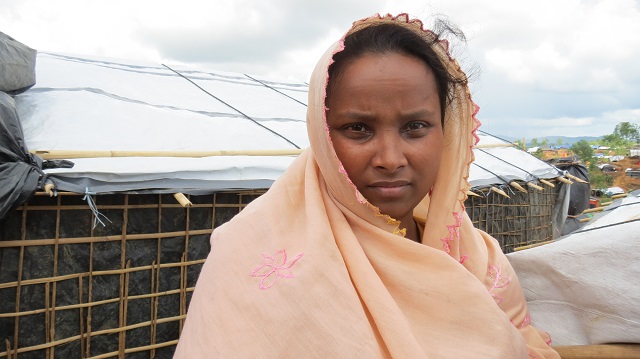 While Rohingyas who arrived earlier have found places closer to the main road, those arriving fresh have no choice but to make their settlements in the hills far off the road. This means they have to walk a distance to get aid or seek medical assistance.

Still in shock and grief, Hamida has not been able to get the ration for herself so far. Her sister has given her some rice and lentils that she got from the aid agencies.  One of her kids is suffering from skin infection and fever. Hamida’s sister took the boy to the doctor available on the camp and got some medicine, but the child has not recovered yet.

When her children cry for their father, Hamida tells them, “look around here, all the people have left home because it’s not safe there anymore. We have to live here for a while.”

More than 500,000 people have fled their homes since August 25 to escape violence erupted in western Myanmar’s Rakhine state to Bangladesh, making it one of the fastest developing humanitarian crises the world has ever seen.

Welthungerhilfe, in collaboration with local partner Anando, has been working to provide support in the form of supplementary food packets and hygiene kits.

Emergency aid for Rohingyas in Bangladesh