Bangladesh’s Char islands are one of the most fragile ecosystems, which is highly prone to climate change. In just one year, Laily Begum, of Chauhali village, has developed a farm using climate-smart practices that can help her cope better with rising temperatures and global warming. She is a role model for the farmers now. 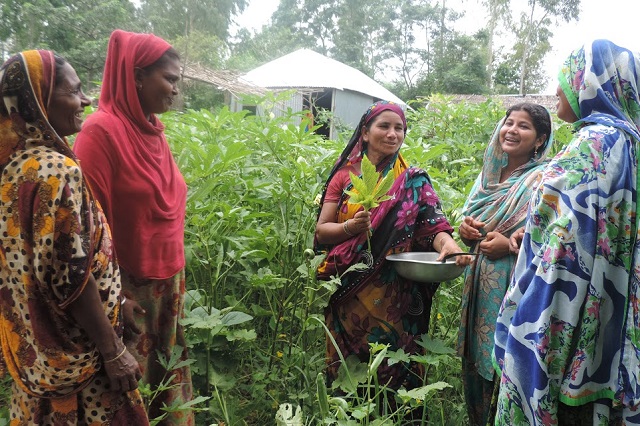 “This is Baro Mashi, a local variety of sweet gourd. Can you see those red leafy vegetables in between? Those are red amaranth. Among them, you will find radish and bottle gourd too. Last year, I had a good production of vegetables on my little farm. I am hoping to make a profit this time too,” said Laily Begum, while proudly showing fellow farmers around her small patch of land in the village of Chauhali, situated on the Char islands of Jamuna river in the northern Bangladesh, one of the most threatened areas by disasters and climate change. Floods and river bank erosion affect hundreds of thousands of lives in the Char areas annually, displacing inhabitants and causing widespread economic damages.

Over the past one year, Laily has been practising climate resilient farming on her 30 decimal (1213 square metre) land in Chauhali, which like any other village on the Char islands is formed as a result of the silt and sand carried down by the Teesta river to Jamuna river from the Himalayas.

Surviving the fury of the floods

Known as a role model today, the 47-year-old has found her calling. Twice a week she invites a group of farmers (particularly women) to her farm and explains how through new and yet simple techniques, they can survive extreme climatic conditions such as irregular flooding, river bank erosion and frequent droughts.

“Almost every second year, our homes and lands inundate completely, forcing us to leave everything behind and take refuge on higher grounds,” said Laily. “With little food and resources, it’s not easy to live in those temporary shelters though. We somehow live to survive, counting down the days, until we go back home again.” 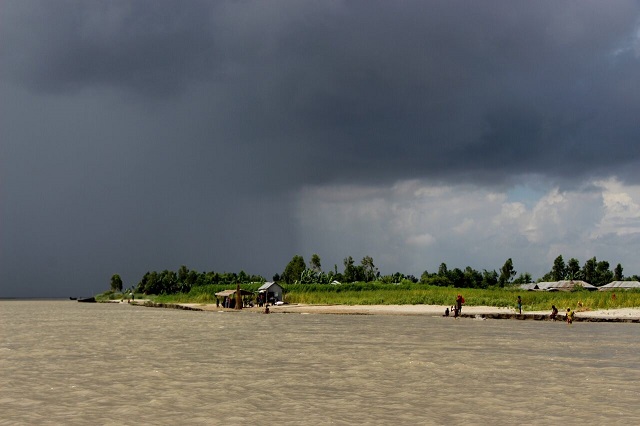 The misery doesn’t end there. When the water levels go down, the families return to their villages to pick up the pieces of their shattered lives, which is nothing but a daunting task, as Laily explained. “By the time we are back, we have lost the crops we planted on our land. Seeds, we stored at home, are rotten or submerged. All we can see are large sand deposits. We have no choice but to start all over and rebuild our lives from scratch.”

And this is not all, she added. “With unpredictable and erratic rainfalls or drought, which are equally common in the area, farmers often are unable to cultivate their crops as per plan and are left with no regular source of income. So, uncertainty continues,” said Laily.

For many, this situation of acute food and finance shortages exists around the year, making them highly susceptible to hunger, malnutrition and poor health. Nutritional deficiencies are commonly observed particularly among women, children and elderly population of this area.

In such vulnerable circumstances, learning to adapt to changing weather conditions is crucial. “It is important not to get beaten by the situation,” as Laily put it. “We need to instead beat it ‘smartly’ by adopting farming practices that make us resilient to the effects of changing climate conditions.”

Something that she herself has learned over the past one year through various Farmer Field School sessions and meetings conducted by Welthungerhilfe’s partner Manab Mukti Sanghstha (MMS) in Bangladesh under the Climate Smart Village initiative. “In 2016, a field officer of Manab Mukti Sanghstha came to our village, to have a meeting with us. Just like others in the community, I was curious too to know what he wanted to share with us. So I came to attend the meeting,” recalled Laily.

“He introduced us to the concept of a ‘Swarnirvar Group’ or Self Help Group and helped the village form one. I became a member of the group soon after.” 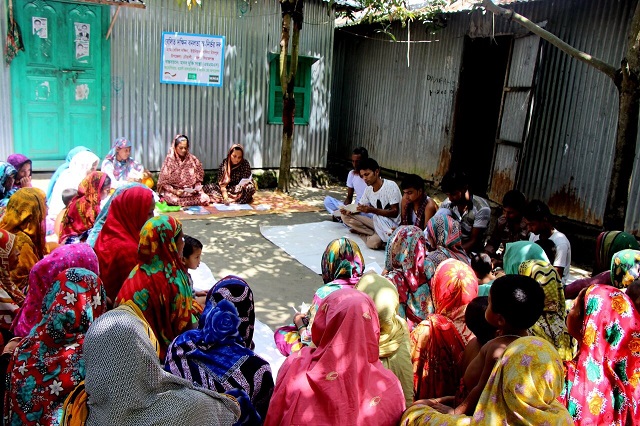 A Self Help Group meeting underway

One of the first things the SHG members undertook with the help of the community and the project staff was to prepare a Village Development and Adaptation Plan (VDAP), a tool which helped the community have an overview of the resources and infrastructure available in their village, helped them identify challenges they face and specific actions needed to tackle the issues. “It was the first time that I became aware of our risks and vulnerability and how we can overcome it. We now plan our crops accordingly,” said Laily.

For Laily, her association with SHG has opened doors to new possibilities, e.g. training for farmers like her, an opportunity, she never wanted to let go. “I didn’t get a chance to finish my school education. We were four sisters and two brothers. I was the eldest. My family was extremely poor. My father got me married when I was just 13 years old. But conditions after marriage remained unchanged. My husband Md. Toyzal Islam, a fisherman, often had to rely on others for boat rides to catch fishes, which he sold in the market. Despite putting all his efforts, the money earned was barely enough to meet our family’s immediate needs. So, when I came to know about a possibility to learn new techniques of farming, I knew I had to attend it,” said Laily, who is a mother of four. She now lives with her husband and two children. The eldest daughter and son are married and have a family of their own.

The practice-oriented training focused on raising farmers’ awareness on climate change and equipping them with skills and technologies that enable them to adapt to the changing environment and help them prepare better to withstand pressures in times of calamities.

“In one of the initial sessions, I found out about things I didn’t know earlier. For example climate change and its effects, especially on our crop, livelihoods and lives,” said Laily.

Soon the practice-oriented sessions became full on. “From discussions on topics such as production and management of different crops using smart techniques to information on specific methods like hand pollination, mixed crop cultivation, floating gardens to sack farming and from seed storage, preparing and using our own compost to using pheromone traps for pest control. We had it all. And each and every method was explained in detail,” she said. 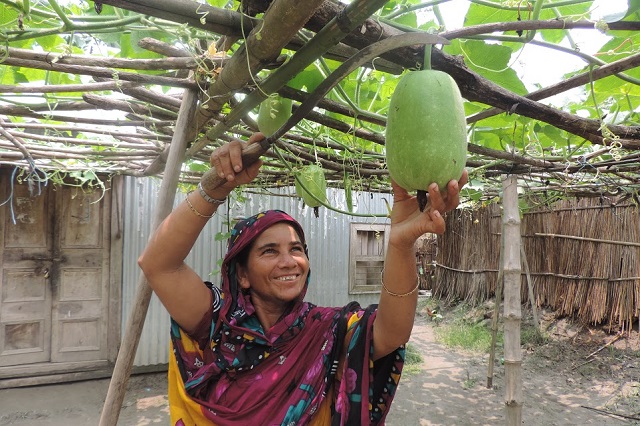 Her biggest takeaway from the training was ‘sandbar cropping’, an innovative technique that can enable a silt deposited sandy patch (sandbars) to cultivate vegetables like sweet gourd and squash.  “With the guidance of the project staff, I grew Baro mashi (sweet gourd), using the sandbar cropping. Along the vine, I grew radish, red amaranth and bottle gourd. Five months later, I harvested 4900 kg (490 pcs) of the sweet gourd. Can you imagine that? We were overwhelmed to see such a yield,” she said.

“I saved 40 pieces of the vegetable for my family and distributed 50 among relatives and neighbours. The rest, I, with the help of my husband, sold on the market and earned BDT 40000. The intercropped vegetables fetched me another 8000 BDT. I had to spend merely 2900 BDT for inputs such as compost, labour, pheromone and seed costs. So, ultimately in the first year, I got a profit of 45100 BDT.”

And things began to click for her. She used the money to buy a new fishing net for her husband and purchased a cow with a calf. The cow gives approx. 4 litres of milk daily, a portion of which she sells in the market.

“Earlier we were completely dependent on my husband’s income but today by selling vegetables and milk, we have an extra income of 400-600 BDT, which helps easily fulfil my family’s family food & others basic needs,” she said.   “Today we can afford to have three full meals a day, which includes not only rice and lentils but also milk, vegetables, fruits and meat. And I am able to put away some savings too.”

Laily’s journey has been remarkable. So is her experience and learning, which she is determined to share with as many people as possible. 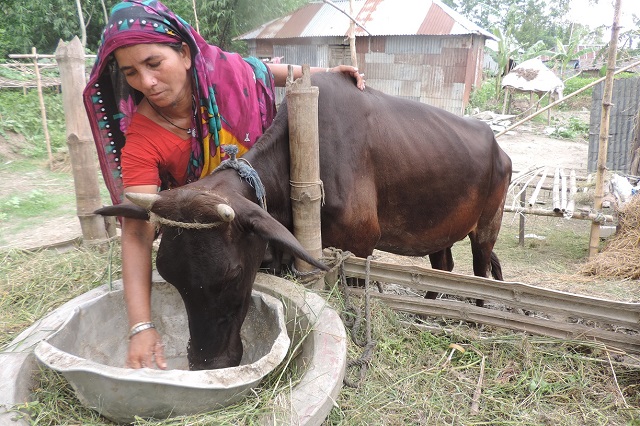 “Engaging with farmers is very important. When I take a group of farmers to my farm, I intend to demonstrate what all can be achieved on the small patch of land and how,” she said. “I also remind them, particularly women farmers, who take care of the family members, but forget about their health, to not only cultivate nutritious vegetables in their homesteads but consume those regularly.”

Laily’s warm personality and willingness to talk to others and answer their queries patiently has made her a popular figure in her village, a recognition she enjoys immensely. “My family and community’s appreciation and respect for my work encourage me to do more and to do well.”

She already has plans ready and is determined to make new pathways. “I want to save some money to buy a boat for my husband so that he doesn’t have to rely on others for fishing. Secondly, I want to establish an integrated farm, where I could rear cattle, goat, duck, poultry and pigeon as well as cultivate vegetables round the year using modern, smart and efficient farm techniques.” 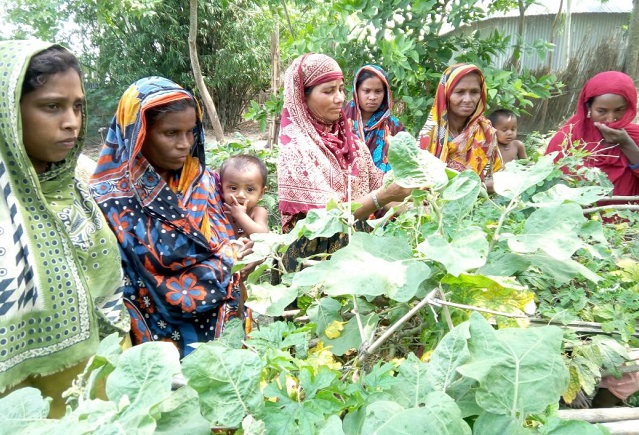 She is optimistic that the farm will give a further boost to her family income and will inspire other farmers to take up something similar so that they are better prepared to face a disaster, the next time, it hits them.

Welthungerhilfe,  along with local partners Manab Mukti Sanghstha and Friends in Village Development Bangladesh (FIVDB), is implementing the project `Promoting Climate Smart Villages for improved food and nutrition security’ in Char and Haor regions of Bangladesh, two most fragile eco-systems. The initiative, supported by Germany’s Federal Ministry for Economic Cooperation and Development (BMZ), has been undertaken with an aim to make the project villages climate smart with improved food and nutrition security.

The objective is to increase resilience among target households to climate change and strengthen capacities of farming communities for better disaster preparedness. The project seeks to directly benefit 10,000 households spread across 50 villages (25 villages each from Netrokona and Sirajganj districts) from the Haor and Char regions. The project specifically focuses on poor and extremely poor families, particularly women and children who are most vulnerable to the effects of climate change and disasters.

Climate Smart Initiative: Reaching Out to the Most Vulnerable