Following a training on livestock rearing at MYRADA Green College, Gulsheera Begum of Nehru Colony has been able to earn enough money to support her family and repay her bank loans. 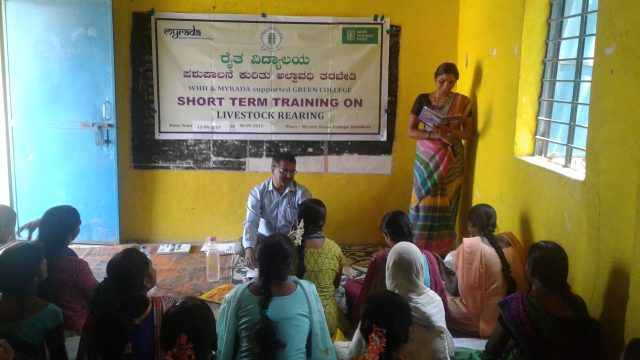 For Gulsheera, her HF crossbreed cow is the most prized possession. She washes and feeds it, cleans its shed every day, without a break. Following this routine is a must for Gulsheera, 38, as the cow has become a key source of income for her family that lives in Nehru Colony in the Hollalkere block of Chitradurga district.

“The cow yields 14 litres of milk daily during calving period. I sell that milk to the Karnataka Milk Federation Milk Society, a cooperative, in the nearby Malenally village, at the rate of Rs. 24 per litre. Besides the government provides an incentive of Rs 5 per litre,” said Gulsheera.

This way Gulsheera is able to earn nearly Rs.12000 a month, a substantial amount for her family, which has so far been dependent on meagre farm income from their two acres of dry land, in which they cultivate maize and ragi (finger millet). To make ends meet, her husband also often worked as a mason, earning about Rs. 6000-7000 (approx. 100 Euro) a month.

A course on livestock rearing

Things began to change for Gulsheera when she found out about a training organised by MYRADA Green College on Livestock Rearing last summer. She was already a part of a SAG  (Self Help Affinity Group – joined 24th Feb 2009) promoted by Myrada CMRC (Community Managed Resource Centre) by that time and was able to save Rs. 50 a week in the common fund. Self Help Affinity Groups are institutions of poor which provides them space and support necessary to take greater control of their lives in private and in the society. Myrada is a pioneer in the country in promotion of such SAGs.

“At a village meeting, I found out that MYRADA was conducting a course on cow rearing. I saw it as an opportunity that I couldn’t let go,” she said. 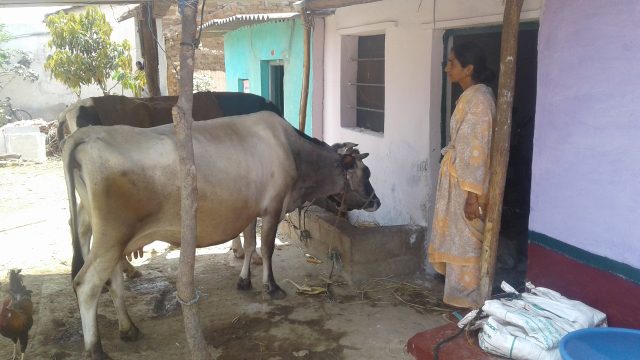 Gulsheera sells the milk of her cow to a cooperative

Her experience in the past with raising livestock was not good. In 2012, she purchased a crossbred cow with a loan from a bank. The cow yielded 6 litres of milk per day, but fell sick frequently and suffered from ticks. Low income from milk coupled with day to day management issues forced Gulsheera to sell the cow. However, she retained the female calf, which is 2 years old now, well maintained and care taken for it to reach conception.

She not only enrolled herself for the course but helped the Green College in the selection of other trainees as well.

The 25-day comprehensive course, which began on 12th April at Myrada Green College, introduced her to various aspects of livestock rearing, including new practices that can help manage the cattle profitably. “Through the course, I found out how important it was to provide clean potable water to cow or to clean the cattle shed daily. I do it now and this has solved the problem of ticks. Also, I now know about hygienic milking and about using green chaffed fodder that helps reduce fodder wastage.

After the successful completion of training, Gulsheera was confident of her newly learnt skills in dairy farming. She took a loan of Rs. 50,000 from her Sri Lakshmi SAG – the SAG had been linked to Sanghamithra Micro Finance for providing the loan – and purchased an HF crossbred cow.

“I am very happy as after the training, I have learnt to manage the cow efficiently. I am spending less and earning more,” she said.

Out of the income earned, nearly one fourth (Rs.3000) is spent on cattle or cattle feed. Rs. 6900 is used for paying monthly instalments for her current and previous loans for cattle. The remaining amount is spent on her children’s education. Her son is pursuing a bachelor’s degree in nursing and her daughter is in the high school. 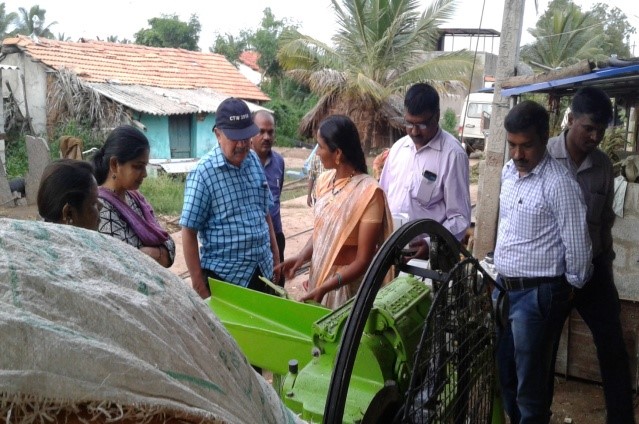 Gulsheera demonstrates the use of chaff cutter to visitors

Post-training, the Green College staff helped the trainees to form a SAG group called Kamadhenu Pashupalana Sangha. The Green College has provided Sangha with a seed money of Rs. 30,000 for using it as a revolving fund for dairy farming. The Sangha also carries out regular savings of Rs. 100 per month- this money is used for intra-group lending. In future, the group will be linked to MFIs/ Banks for loans to its members.

Using Rs. 10000 from the Sangha’s revolving fund, and Rs. 2000 from Sangha’s savings, Gulsheera purchased a chaff cutter worth Rs. 24000 to efficiently manage the cattle fodder. She received a subsidy of Rs. 12000 (50%) from the Animal Husbandry and Veterinary Sciences department. She rents the chaff cutter for chopping fodder to the rest of the dairy farmers in the village.

She has motivated her neighbours and co-trainees to purchase an HF crossbred cow as well. Gulsheera received a model dairy farmer award, especially for using Chaff cutter for better usage of fodder, during a recently held Farmer’s Day celebration (23rd December) at the MYRADA Green College.

With the support from BMZ and GIZ, Welthungerhilfe is implementing the Green College project in Jharkhand, Orissa, West Bengal, Karnataka and Maharashtra.

11 Green Colleges under the One World No Hunger Initiative will progressively train 36,000 rural until December next year.